Hybrid Voice is BACK

UPDATED 10/4 – The Bits are here – yes to CCE download is live on this link:
https://www.microsoft.com/en-us/download/details.aspx?id=51693

Installs alot of new powershell CMDlets, and the config files for CCE – download of the server bits is in progress… more to come on this 🙂

With the new E5 licensing SKU Microsoft has brought back Hybrids to the SFB/ Lync customer.
The headline for this is CloudPBX

Basically right now you could divide the world into US and all others when discussing options for deploying Cloud PBX.

There are 3 different scenarios supported.

With PSTN Calling Service
Here all users are homed online, and the PSTN connection is owned and delivered by Microsoft         as a service.
It is not required to have any Skype for Business servers onpremise !
This is ONLY available in the US 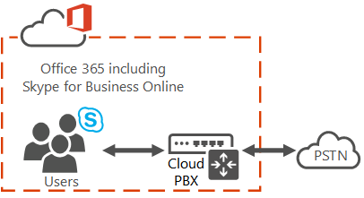 With Onprem PSTN via Cloud Connector Edition (CCE)
In this scenario all users are homed online, but the PSTN is provided by existing Trunk or ISDN/ E1 using existing customer equipment. The CCE is deployed onprem in the DMZ – and Azure ADSync is required.
This is available worldwide.

Here users can be homed both onpremise and online – while using existing onpremise PSTN connectivity. The existing onpremise SfB/ LYNC deployment must consist of a Fully functional deployment with EDGE and Edge server and the next hop must at least run LYNC Server 2013.
The onpremise deployment can obviously also be fresh installed to support a greenfield with special requirements that are not supported by CCE. See the chart below for feature-comparisons.

So lets look at the features and how they compare 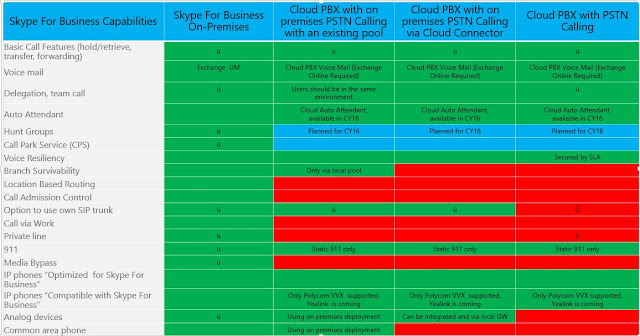 So lets take a look at this new family member.
Late 2015 news was released of the first Cloud connector – or minimal topology – this consisted of three VM’s with hosts both in DMZ and behind the corp firewall. Please make sure not to confuse them – that early version was never released – this new version sits entirely in the DMZ and is therefore more simple to deploy its known as Cloud Connector V2
It is a downloadable set of VM’s that has a hard requirement for a dedicated physical server sitting in the DMZ with three Nics. The installation is scripted and controlled by an ini file.
There is no dependency on existing AD infrastructure, it creates its own forest during deployment, meaning there is even a virtual DC among the 4 VM’s.
Which are.
A Mediation Server, an EDGE server, a CMS and a DC Cloud connector.
All Public DNS for SIP points to Office365 – so EDGE role is only there to take care of federation between onprem PSTN and the users online (all users)
Co-existence with onpremise SfB/LYNC is not possible.
For now there is no Media Bypass, so all media goes through the Mediation Server… but stays onprem – only signalling will always travel through Office365.
This is the result: 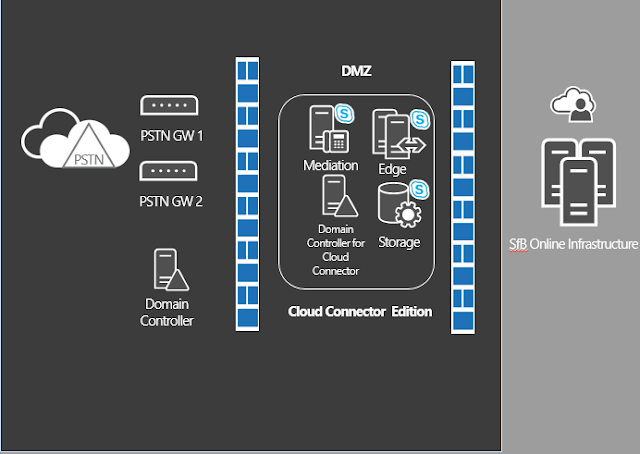 What about Capacity and HA.
The info on Technet says a maximum of 500 concurrent calls per CCE. And one PSTN site can contain a maximum of 4 CCE’s.
And thereby also answering the HA question, simply deploy 2 CCE’s to create HA.
However there are some limitations to consider, there is no automatic site tolerance – so if one data-center (one PSTN site) goes down, users online will not automatically fail-over to the secondary PSTN site.
Please always turn to technet for up-to-the-minute info on sizing and planning
https://technet.microsoft.com/en-us/library/mt605227.aspx


The Hardware requirements for the physical box are on the heavy side and obviously Hyper-V is a HARD requirement due to the fact that installation is scripted, including creation of virtual switches a.s.o.
Dual 64 bit, six core processor (12 real cores), equivalent or better than dual Intel Xeon E5-2430 v2, 2.50GHz, 15M Cache, 7.2GT/s QPI, Turbo, 6C, 80W , Max Mem 1600MHz.  32 Gb ECC RAM equivalent or better than 8GB RDIMM, 1600MT/s , Four 600GB ( or better) 10K RPM 128M Cache SAS 6Gbps, configured in RAID 5 configuration.  Three 1 Gbps RJ45 high throughput network adapters
So how about the media Flow –  here is a diagram showing the media paths for a audio call where a users sitting on the same site as the PSTN and CCE infrastructure is receiving and inbound call from PSNT. Notice how the media never leaves the building 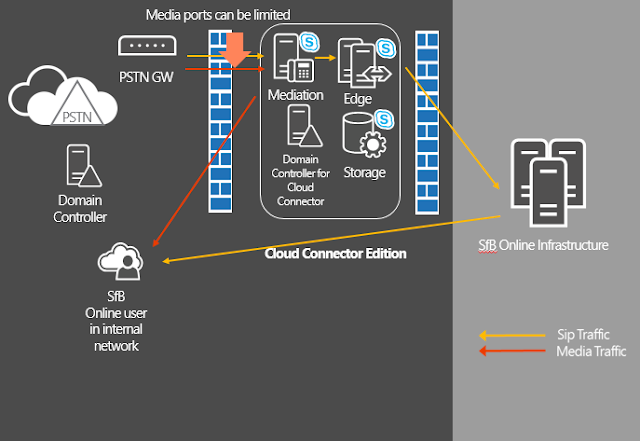 The above media path will obviously also be true in the opposite direction where a users dials outbound.
With this CCE sitting in the DMZ we also have to talk to the firewall admin, the requirements are actually similar to standard Skype for Business AV and Access EDGE – again turn to Technet for complete reference. Here is a diagram to show them 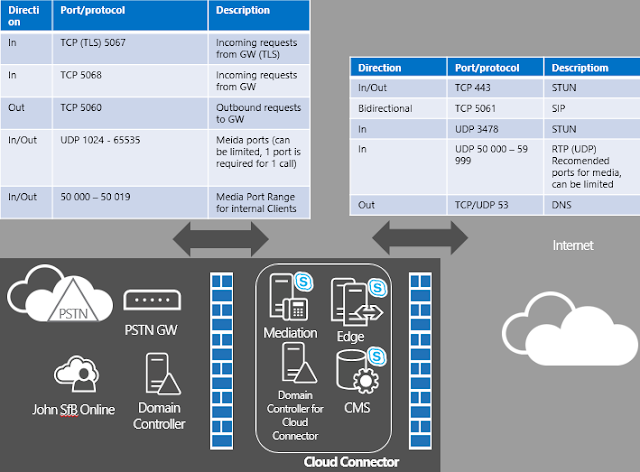 The Management side of things is straightforward – everything is managed in powershell and a couple of new cmdlets are introduced. The CCE does not support Topology Builder meaning changes are achieved by editing exported config and the importing it again – but the CCE will in most cased be a fixed system where changes will be nonexistant or rare. But again this being a brand new, not yet released product, these things could still change.

So to summarize.
CCE can help you make the transition to Office 365 phased and simple.
Hybrid Voice allows you to keep existing PSTN due to carrier agreements, price concerns or maybe even security concerns or requirements from a policy
Keep using existing onpremise Swithcboards, Contact centers, plugins and ad-dons while taking advantage of Office365.
More on release dates for these components ASAP
Thats all for now – Happy SKYPE’ing