Skype for Business – What to expect 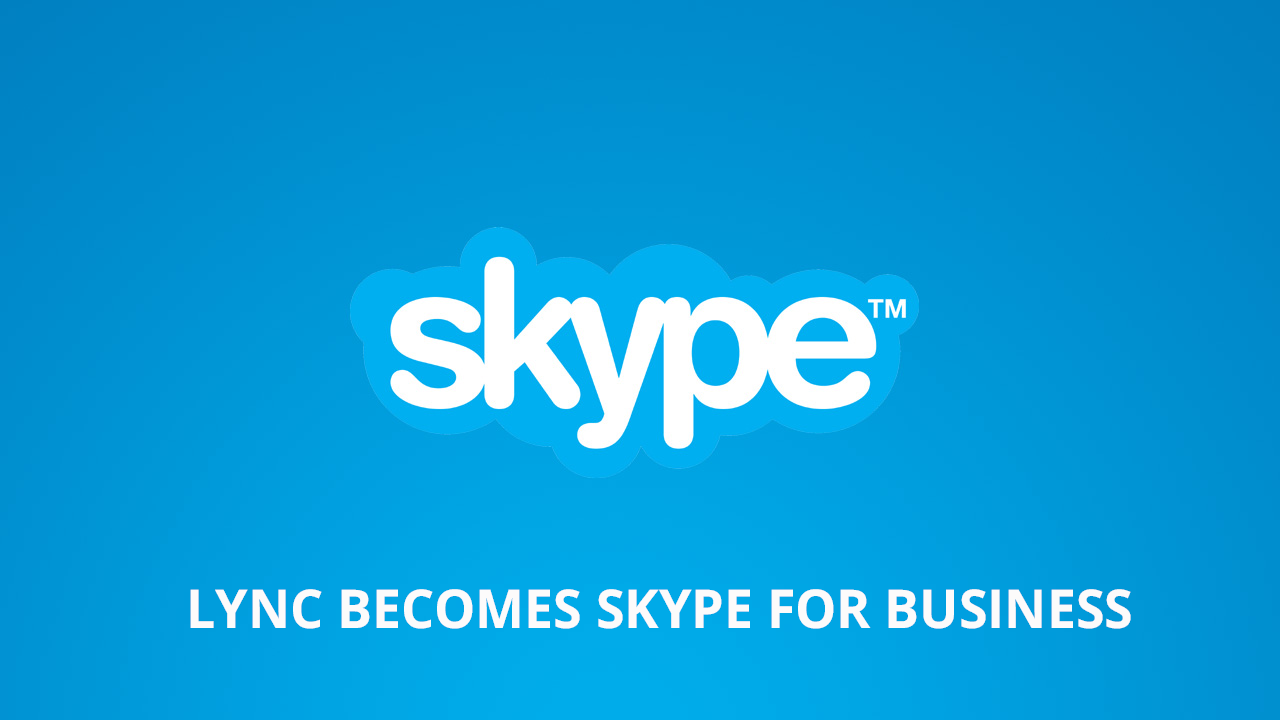 For the last couple of years, often when I was talking to new customers about LYNC I heard the comment – “Well isn’t it just like Skype” When explaining LYNC’s place in the infrastructure.
And with a serious expression, answering. No No No – and YES.

Where LYNC is a centralized, serverbased, secured, manageable and scalable communications and collaborationsplatform – Skype is “just” a P2P client with video.
This has been true until now

Research from Telegeography projected that at the end of 2011, SKYPE accounted for 33 percent of all long-distance minutes – 145 billion of the total 438 billion minutes. According to Skype CEO Tony Bates, Skype has 254 million monthly active users and is “growing somewhere around 40% year on year.”
So from a marketing perspective I guess, rebranding LYNC was the clever decision.
But enough about names

Now just announced GA will be APRIL this year !! according to the SfB blog http://blogs.office.com/2015/03/16/get-ready-for-skype-for-business/
So companys must begin to plan now for the upgrade and/ or deployment process.
Already possible now to download the preview client and try it on for size here: http://www.microsoft.com/en-us/evalcenter/evaluate-skype-for-business?i=1

Here is a little on what we know so far:
News:

First of all, you will meet a new upgrade GUI: 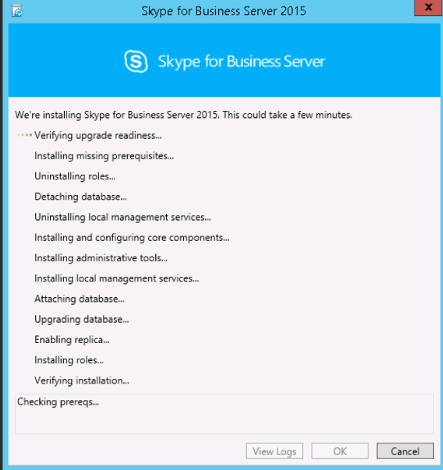 Great News for company’s that can allow downtime on the LYNC environment, for all Lync 2013 only topologies, the upgrade process is in-place. This means it is an install over process rather than the traditional side by side upgrade / migration process traditionally adopted.

For companies that can not allow pool downtime, side-by-side is still the path to choose.
During the upgrade process you will need to convert the Lync topology into a Skype for Business topology. This is done in the new Skype for Business topology builder by simply selecting your front end servers and choosing to upgrade to Skype for Business server. Once these have been moved in the topology builder the initial publishing of the topology can take many hours. Microsoft say that this is largely dependent of the amount of front end servers in a pool and the amount of users the pool supports. They say that this publishing process can take upwards of 2 hours to complete. During this time, it may seem like the topology builder has crashed, or not doing anything, but the advice is to leave it well alone until it finishes.
Important to note is ALWAYS install latest CU for LYNC2013 before you begin upgrading.

Important to note is that ALL Front End servers in a pool, must be completely upgrade before any services are started.

Upgrading a Standard Edition server to Skype for Business will also upgrade SQL Express on the front-end server to 2014. However, as a pre-requisite this server must be running SQL Express 2012 SP1. The SQL upgrade itself will require a reboot and while the Standard Edition server is upgrading no users will have access to Lync services. So also here plan for downtime.

Tri-existence is NOT supported, so if you run Lync 2010 and 2013 coexistence then you must first complete the 2010 to 2013 migration and decommission your 2010 Lync servers before thinking of upgrading to Skype for Business. Once you have all your users on 2013, you can use the in-place upgrade process.

So for a clean LYNC 2013 environment with more than one pool, upgrade can be performed with minimal downtime – by moving users between pools.
So Upgrade from 2013 to SfB could look like this 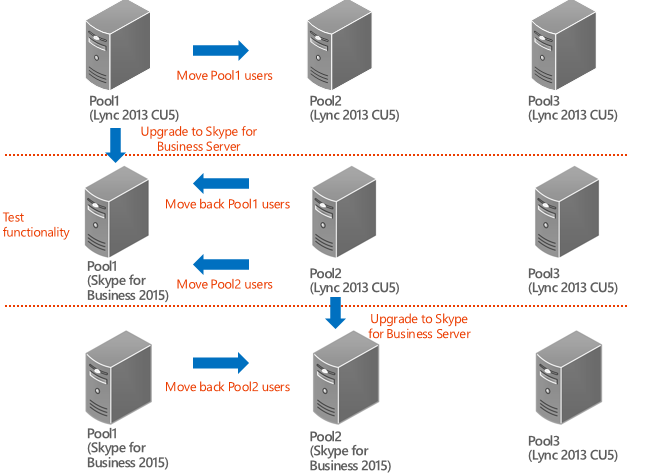 Upgrade From LYNC 2010 directly to SfB: 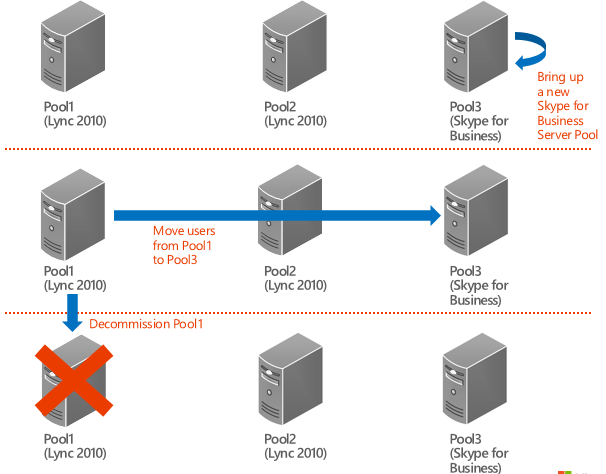 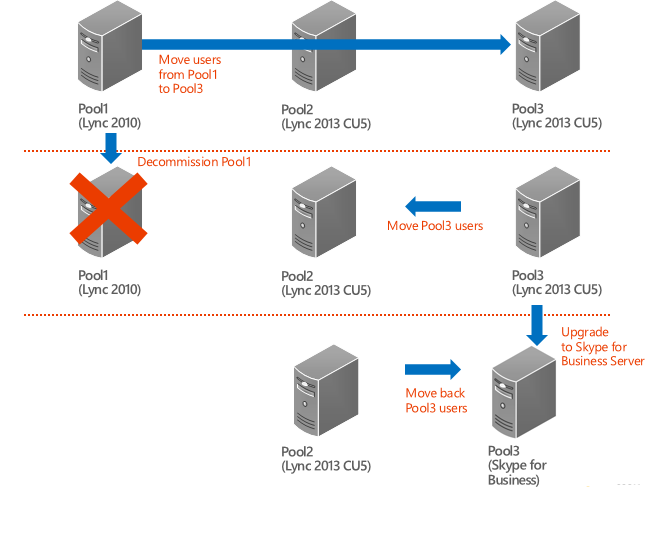 If you don’t have the possibility to move users to a temporary pool, use the offline approach. 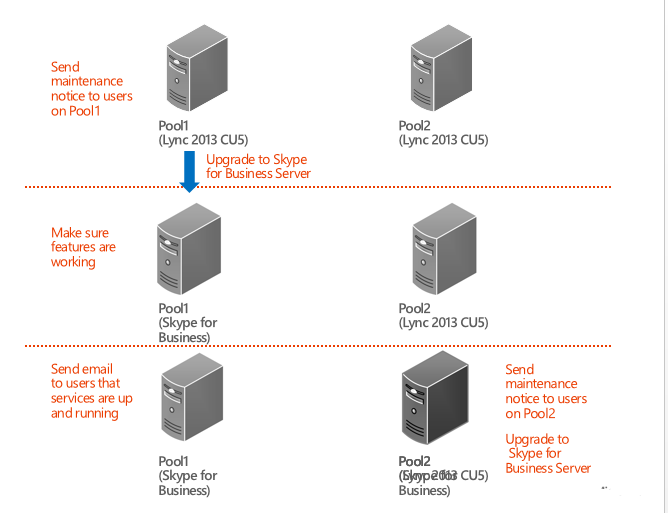 Server support:
Skype for Business requires the use of Window Server Fabric v2  to provide new HA capabilities within the front-end pool. Windows Server 2008 R2 is still going to be a supported OS for Skype for Business. However this will be the last iteration on this OS.
recommended is Server 2012R2

So sit back and relax – while waiting for GA
I am looking very much forward to Ignite conference in Chicago where we can dig deep into Sfb. 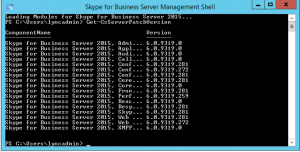